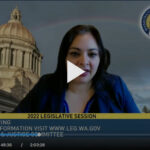 Fleming Law client testifies to protect consumers after obtaining a six-figure settlement: Aimee broke her neck in a car-crash, after a driver reversed into her twice on a busy section of I-5 in Seattle

UPDATE: In February 2022, Ms. Fleming’s client,  who sustained a broken neck among other injuries in a car accident, testified at the legislative hearings in support of SB 5947. The current bill would exempt personal injury settlements over $20,000  (Aimee’s was a confidential 6-figure settlement, read below for some details) from the reach of debt collection agencies and other debtors.  She will continue to inspire others as she serves as a spokesperson to lobby for the passage of this important bill, to help many other struggling Washingtonians who’ve also been injured.

Aimee Luzier was injured in a four car crash. On her way back home after a weekend meditation retreat, she was driving north on I-5 just past the James Street exit. Up ahead, she had noticed a lot of red lights that told her that she need to slow down. She pumped her brakes to come to a speed more common in a school zone. Then, she noticed the car in front of her reversing in her lane. She laid on her horn, but there was no stopping the driver ahead.

Apparently, the Reverse Driver had panicked after crashing into the car ahead of him. He wanted to get to the shoulder, but was in one of the far left lanes. Without checking to see that Aimee was right behind him, he slammed on his accelerator and crashed into the front of her RAV4. The airbags deployed and Aimee was in shock. On top of the fact that she already suffered from MS, this crash left her with serious injuries that included a neck fracture.

Her own insurer did not want to accept her set of facts. But her attorney, Catherine Fleming, rolled up her sleeves and researched all of the details of the crashes, including what the driver ahead of Mr. Reverse Driver had experienced and what the officer recounted at the crash site. Their accounts all supported Aimee’s version. In the end, Aimee was compensated for her damages accordingly.

Despite the common assumption that the driver in the back of a car crash is the one at fault, Aimee was clearly not liable at all. Focused on getting her car crash injury bills along with her pain and suffering, Ms. Fleming made sure that Aimee’s version was the one that the mediator accepted as most plausible, thereby persuading Aimee’s insurer to concur.