When do you need an experienced Pedestrian Injury Lawyer?

If you or are family member or friend were recently injured as a pedestrian in an accident when another party was at fault, you need legal representation. There are a maze of Washington laws and statutes that an experienced Pedestrian Injury Attorney know in order to get you the maximum amount of compensation you deserve. You cannot predict the length of care and help you may require as a result of your pedestrian accident.

In our region and especially in the greater Seattle area, the number of pedestrian injuries has surged in the last several years. Traffic fatalities involving pedestrians (including people in wheelchairs and those using skateboards and scooters) rose by 62.5 percent from 2010 to 2019. Analysis revealed that the speed of the involved vehicle is often a factor.

In a Seattle Department of Transportation (SDOT)February 2020 Bike and Pedestrian Safety Analysis, a reported 6,817 pedestrian crashes included 874 serious or fatal pedestrian injuries. Compare this to a reported 5108 bicycle crashes that included 386 serious or fatal injuries. We all walk in Seattle, whether the walk is a quick jaunt from your car to an appointment or a long walk from Capitol Hill to Belltown. The chances of an injury, despite taking precautions, increases the more we see drivers and bicyclists sharing the road.

A seasoned pedestrian accident attorney also understands the larger picture. Fleming Law’s pedestrian injury legal team asks their clients to focus on recovery to return.to their new normal, We then take the reins and focus on obtaining the best possible recovery from all negligent parties. Often, a city, county, and/or state is also negligent because of their poorly designed roads.

An accomplished injured pedestrian attorney will work effectively and efficiently to obtain maximum compensation for her clients. Money cannot rewind time, but the right amount will allow clients to pay their medical bills, time off from work, pain/suffering, and emotional trauma.

Find out for yourself why injured pedestrians have referred their friends and neighbors to Fleming Law for accident injury cases.

Review these important safety tips and pedestrian laws if you want to walk in Washington and remain injury and accident free.

While Washington has ambitious goals for lowering rates of pedestrian involved collisions, increase awareness for all who use our roads is an important way to prevent accidents. We all need to know the rules of the road and follow safety tips. Some are mentioned below.

Pedestrians must obey traffic signals and traffic control devices unless otherwise directed by a traffic or police officer (RCW 46.61.050).

Drivers and bicyclists must yield to pedestrians on sidewalks and in crosswalks (RCW 46.61.261).

No pedestrian or bicycle shall suddenly leave a curb and move into traffic so that the driver can not stop (RCW 46.61.235).

Every driver of a vehicle shall exercise due care to avoid colliding with any pedestrian upon any roadway and shall give warning by sounding the horn when necessary (RCW 46.61.245).

Stop for pedestrians at intersections

Drivers shall stop at intersections to allow pedestrians and bicycles to cross the road within a marked or unmarked crosswalk (RCW 46.61.235). See Washington’s Crosswalk Law for more information.

Yield to vehicles outside intersections

Every pedestrian crossing a roadway at any point other than within a marked crosswalk or within an unmarked crosswalk at an intersection shall yield the right of way to all vehicles upon the roadway (RCW 46.61.240). 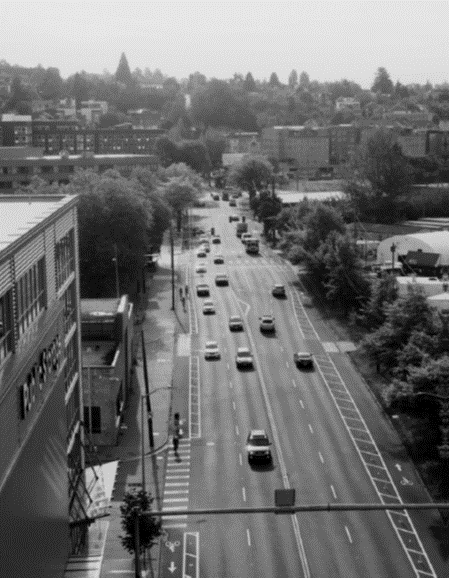 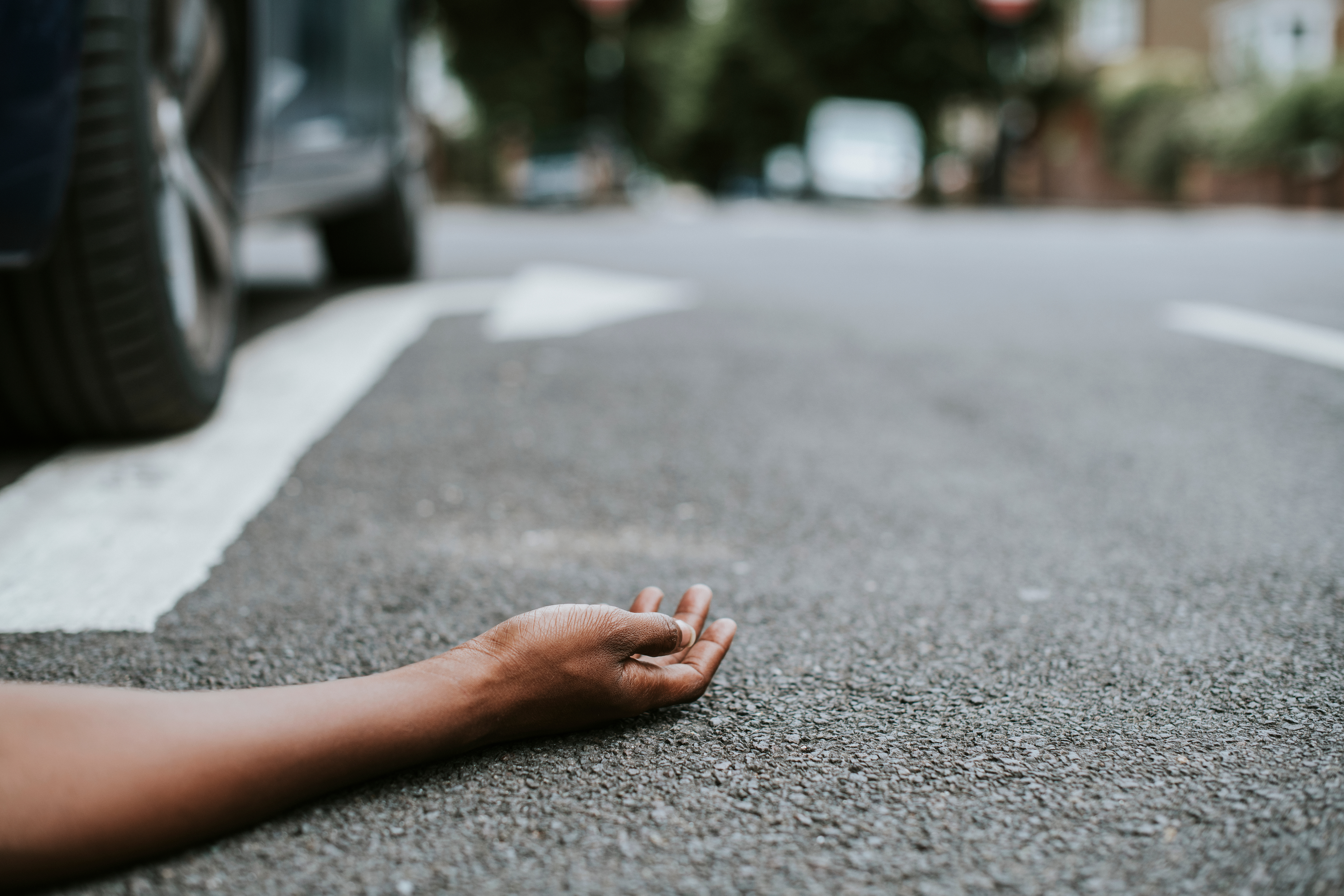 Prevention is always the best protection against collisions. A key to preventing pedestrian injuries is to stay aware of vehicles around you. Put away that device and wait to text or use an app that distracts you while walking. While the law favors pedestrians and grants them the right of way, this does not mean pedestrians are never liable if they fail to exercise reasonably care for their own safety.

If sidewalks aren’t accessible, walk in the section of the road, such as the edge of the road or on the left shoulder of the road, and face the traffic flow. Use pedestrian bridges when they are available.

Crosswalks and mid-block crossings are the most common locations for pedestrian crashes. Use marked crosswalks and signalized intersections when available. Every intersection is a legal crosswalk under Washington law unless it is marked as closed or where it’s located between two signalized intersections you could cross at. In addition to intersections, driveways are another place where you can expect to encounter drivers or bicyclists exiting or entering. Take an extra moment to confirm that you can cross safely.

Stop at the curb and look left, right, and left again for traffic. Stopping at the curb signals drivers that you intend to cross. Always obey traffic signals.

Stay as visible as possible

Think twice about walking in all dark clothes if the sun will set soon or you are likely going to walk in a poorly lit area. Drivers cannot always spot every figure when they are barely visible. Consider wearing something reflective and bright. Use a flashlight when walking in the dark. This will help you see large cracks in the sidewalk or shoulder and also make you visible to drivers nearby

Don’t let small children cross streets by themselves, please. Don’t allow them to play or walk near roads. They don’t have the judgment and life’s experience to understand and gauge when a situation involves extra caution.

Whether one is impaired due to use of alcohol, drugs, or a medical condition, this puts everyone nearby at risk for a crash. When a pedestrian or driver does not have full use of all of their reflexes, cognitive skills, and/or motor skills, the chance of a serious accident multiplies.

Just because you are walking, don’t throw caution to the wind after a medical procedure or excessive use of an intoxicant. Take public transportation, a rideshare, or ask a friend drive you home.

At intersections with traffic signals and/or controls, pedestrians must obey the signal and not cross against the stop signal unless specifically directed to go by a traffic officer.

Safety tips for drivers to save lives

Stop for people in crosswalks

Every intersection is a crosswalk –This is the law. Drivers must stop for pedestrians at intersections, whether it’s an unmarked or marked crosswalk, and bicyclists in crosswalks are considered pedestrians. Also, it is illegal to pass another vehicle stopped for someone at a crosswalk. In Washington, the leading action by motorists that results in them hitting someone is failure to yield to pedestrians.

Put away your phone!

Hand-held cell phone use and texting is prohibited for all Washington drivers and may result in a $136 fine for first offense, $235 on the second distracted-driving citation.

Look and then look again before turning

Most pedestrians and bicyclists are involved in crashes in Washington state when they are crossing the road. Stay extra vigilant for people walking or biking near senior centers, schools, community centers, shopping districts, and other destinations.

Pass at a safe distance

Leaving an extra safety buffer in time and space when passing people gives you more ability to see and react, and it’s also the law. Be aware that a bicyclist needs to be positioned in the lane a safe distance away from opening car doors, grates, and other hazards not visible to a driver. Drivers need to move into the other lane when possible or leave at least three feet while passing (RCW 46.61.110). Darkness and weather conditions may affect a driver’s ability to gauge distance.

If a driver hits a pedestrian or bicyclist at 20 mph or less, there is an estimated 95 percent survival rate; at 30 mph, a pedestrian has only a 5 percent chance of walking away without injury and the death rate jumps to 45 percent. (The driver trying to save

In your first meeting,

Remember: You have everything to gain and even more to lose, if you do NOT retain experienced counsel.

When you win, we make safer roads for all.