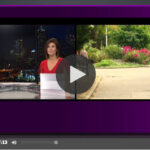 When this articulate, bright, and warm woman first contacted Fleming Law about her car accident injuries, she worried about the fact that she was the driver who was behind the negligent driver.  Everyone knows that the driver in a motor vehicle collision who is in the rear is immediately determined at fault. Do you think that’s how attorney Catherine Fleming let her client’s case proceed?

Aimee Luzier was the driver in the last car of a four-car collision. She suffered from MS at the time of the car crash. Reasonable and intelligent, Aimee was doubtful that a personal injury attorney would do anything but end an initial consultation abruptly based on these facts alone. But, this is what separates Catherine Fleming from the many other car accident attorney, looking for “easy” cases.

After a lengthy initial meeting, Catherine explained to Aimee why she believed in her case and would confidently take on the driver who rammed his car into the front of hers when he reversed twice on I-5* in stop and go traffic. On a tiny fixed income due to her disability as an MS patient, she could not afford to pay all of her medical bills and avoid bankruptcy. This all changed after Fleming Law agreed to represent her.  Aimee obtained a confidential six-figure settlement. Catherine also asked Leah Snyder to assist due to a couple medical emergencies.

The initial reactions, including her own claims adjuster, were to blame Aimee and ask her to move on. This was an uphill climb, but Catherine parsed out the sequence of events relating to the crashes causing Aimee’s broke neck and other serious injuries.  Visit this site again for more details.