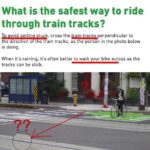 In Seattle, do we need to resign ourselves to bike injuries? We have the right to ask for reasonably safe roads. This is the law. But why do we so rarely get this from our cities, towns, and the state?

How many more injuries and catastrophic crashes for people on bikes are needed before SDOT finally does something to make S. Jackson safer? At the earliest stages of the First Hill Streetcar project, consultants for the City provided options to make the road safer for people on bikes. Protected bike lanes, physical separation between transit and bikes, and various other options were laid out. SDOT choose not to move forward with any of those recommendations. The result: Countless bike crashes and injuries to people, who took the City of Seattle’s invitation to reduce their carbon footprint and motor vehicle traffic traffic by biking.

Below is the site of crashes when people on bikes are forced to move around stopped traffic in the curb side lane taking the hazardous path in the next lane with the streetcar tracks.

People on bikes, familiar with this path, need to anticipate a sudden third lane after crossing 5th Ave S.

On behalf of injured bicyclists, Fleming Law and co-counsel, CJY Law Firm, and Ramsey Injury Law Firm have filed consolidated claims. Plaintiffs Janet Ball and Eric Boris. While both sustained serious injuries, Janet Ball now has limited use of her legs and continues to struggle with a complex neurological condition arising from her bike crash on S. Jackson.

Fleming Law client Eric Boris sustained injuries, including a broken clavicle, in a similar manner in the same location where Janet Ball crashed on S. Jackson. Because no protection is provided to people on bikes on the major arterial in Chinatown International District (CID), bicyclists are forced to navigate between the shared bike/bus lane and the other lane that contains First Hill streetcar tracks.

The westbound approach on S. Jackson St. towards King St. Station typically includes a line of buses that stretch for at least one city block east of 5th Ave South from 4th Ave. S. past 6th Ave S. SDOT is aware that these streetcar tracks are hazardous to people on bikes and recently developed an informational piece to “educate” folks on how to contend with these dangerous conditions. Below is a version with my redlines of SDOT’s piece. Pray tell, how does one safely ride “through” train tracks?

Below is a copy of the complaint filed on behalf of injured bicyclists Jan Ball, her husband, and Eric Boris.

Check back for updates,